Below is a comparison of the headphone driver enclosed into a front enclosure formed using round and elliptical cushions, the latter having a larger enclosed volume.  The cushions are initally modelled as solid entities (so really looking at the effect of shape and added volume). 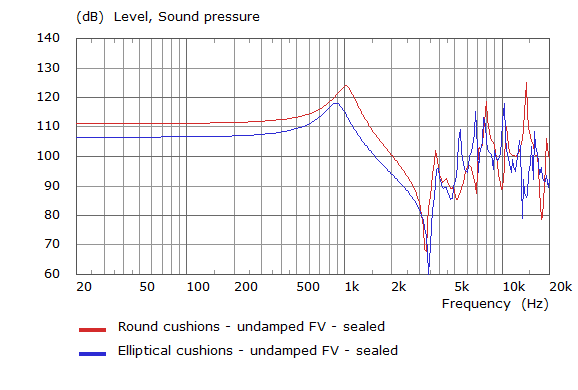 The elliptical system has lower efficiency at low frequency which is due to the volume increase.  At higher frequencies, there is a denser distribution of modes in the elliptical profile.

The graph below shows the effect of adding frame vent damping to the driver for the elliptical system.

A similar result to the round enclosure case where the 900Hz resonance peak and following 2.4kHz dip become suppressed, along with some of the upper front enclosure resonances.  Although the diaphragm separates the front and rear enclosures, the acoustic coupling may transfer some of the effects of the rear cavity resonances that are influenced by the frame vent damping.